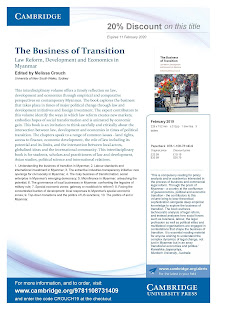 Cambridge University Press has recently published the paperback version of The Business of Transition: Law Reform, Development and Economics in Myanmar.
This interdisciplinary volume offers a timely reflection on law, development and economics through empirical and comparative perspectives on contemporary Myanmar. The book explores the business
that takes place in times of major political change through law and development initiatives and foreign investment. The expert contributors to this volume identify the ways in which law reform creates new markets,
embodies hopes of social transformation and is animated by economic
gain. This book is an invitation to think carefully and critically about the
intersection between law, development and economics in times of political transition. The chapters speak to a range of common issues - land rights, access to finance, economic development, the role of law including its potential and its limits, and the intersection between local actors, globalised ideas and the international community. This interdisciplinary book is for students, scholars and practitioners of law and development, Asian studies, political science and international relations.
Chapters include: 1. Understanding the business of transition in Myanmar; 2. Labour standards and international investment in Myanmar; 3. The extractive industries transparency initiative: new openings for civil society in Myanmar; 4. The risky business of transformation: social enterprise in Myanmar's emerging democracy; 5. Microfinance in Myanmar: unleashing the potential; 6. The governance of local businesses in Myanmar: confronting the legacies of military rule; 7. Special economic zones: gateway or roadblock to reform?; 8. Facing the concentrated burden of development: local responses to Myanmar's special economic zones; 9. Top-down transitions and the politics of US sanctions; 10. The politics of aid in Myanmar.