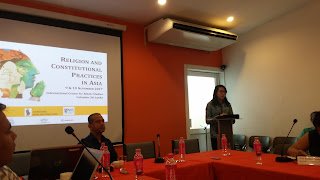 Over the past two days, the Centre for Asian Legal Studies (CALS) and the International Centre for Ethnic Studies (ICES) organised a Conference on Religion and Constitutional Practices in Asia. Religion is a highly salient feature of many Asian societies and its significance extends beyond the private sphere. In countries like Indonesia, Sri Lanka, and Malaysia, religion was a key factor in driving nationalist and anti-colonial consciousness, and it remains a key tool for social and political mobilization. In other countries, religion is intimately tied with ethnic identities, and in some, the salience of religion found its way into constitutional texts and arrangements. There is thus great diversity in how religion manifests itself in the social, political, and legal (constitutional) settings of these Asian countries. The Conference explores the interaction between religion and constitutional law in Asia, especially in those countries where strong religious identification exists in the social and political spheres. Featuring scholars from South Asia, South-East Asia, Australasia, and North America, the conference will assess trends and developments in thirteen Asian jurisdictions.