This book review was first published online in the Journal of the American Academy of Religion (2016). The article is available for free in pdf download from that site. 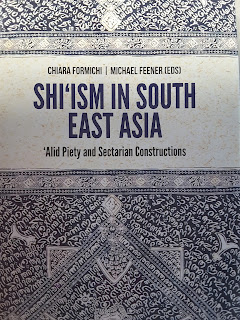 In 2013, a major case was brought to the Indonesian Constitutional Court challenging the Blasphemy Law, which has often been used over the past decade to imprison people who are found to offend the orthodox teachings of Sunni Islam. This court case was brought by several Shi’ites, some of whom had been convicted for blaspheming Sunni Islamic teachings. The court case came in the wake of a recent rise in religious intolerance, condemnation, criminal convictions, and violence against the Shi’ite community in Sunni-majority Indonesia. Although the applicants were unsuccessful in their petition to the Constitutional Court, the broader claims that Shi’ites are part of the Muslim community and religious fabric in Indonesia were unmistakably clear. Yet despite both the contemporary relevance and historical significance of Shi’ism to the region, the Shi’ite community and its influence on religious practice past and present is understudied in the academic sphere.

The book Shi’ism in Southeast Asia pioneers new scholarship in the field of Islamic studies, history, and religious studies by offering a thoughtful collection of essays on Shi'ite Muslims in Southeast Asia. The book is the outcome of a conference organized by the Religion and Globalisation cluster at the Asia Research Institute (ARI) of the National University of Singapore. For the past seven years (2009-2015), scholars at ARI have been forging new research ground under the leadership of Professor Michael R. Feener (now at Oxford University). This volume is the outcome of a project led by Chiara Formichi (formerly a research fellow at ARI, now of Cornell University) and Feener. In the volume, Formichi and Feener bring together experts in the fields of Islamic studies, history, comparative literature, anthropology, and the humanities who are located at institutions from Australia, the United States, Asia, and Europe. Their contributions offer a rich and historically informed analysis that seeks to set a new agenda for research in this area.

This book is of direct relevance to religious studies scholars who are interested in the study of religious sects in general and Islam in particular. Most studies of Shi’ism to date are geographically focused on the Middle East. Much has been written on the 1979 Iranian Revolution and its broader influence in the Muslim world. Studies of Shi’ism often position Shi’ism in direct contrast to Sunni Islam, and focus on the Imami or Twelver Branch of Shi’ism as the largest sect within Shi’ism. In contrast, this book helps to widen the focus in three ways.

First, it broadens the locational focus beyond the Middle East to Southeast Asia and ranges in its geographic coverage from Thailand and Malaysia to Singapore and Indonesia. Yet the region is not studied in isolation; rather the deep historical connections to the regions that we know today as South Asia, Central Asia, and the Middle East are also considered.
Second, the book extends far back to retrace the historical legacy and influence of Shi’ism in Southeast Asia, emphasizing both its deep historical past, the way it has changed over time, and its contemporary relevance. It stresses the historical importance of Shi’ism to the region, such as the evidence of references to Ali and Fatima in various manuscripts that were written in languages common to Southeast Asia. By bringing this historical legacy into the present contemporary era, it is ambitious in its breadth and scope.

Third, the volume is concerned with the highly pluralistic manifestations of Shi’ism in Southeast Asia and the way in which it has influenced, and been influenced by, local cultures and traditions. As this volume points out, the syncretic and pluralist nature of Shi’ism in Southeast Asia has long been recognized. In doing so, the book cautions against the modern tendency to view Shi’ism in contrast to Sunni Islam in a polemic way. Instead Formichi and Feener advocate for a deeper appreciation of the past legacy of Shi’ism in the region and attention to both the points of change and continuity that mark the Islamic community today.

As a way of uniting the chapters, the book is centered around the concept of ‘Alid piety as a means “to understand the importance of the Prophet’s family (Ar. ahl al-bayt) as they appear in diverse religious, literary and cultural expressions of Islam” (4). The volume is structured into four parts: historical foundations, literary legacies, cultural expressions in the modern period, and contemporary developments. This structure helps to tie together chapters that share common themes. This volume marks an important beginning of a new trace of research in this area.

The impression this book leaves is of the significant legacy of Shi’ism in religious texts and in local ritual practice. This legacy defies the overly simplistic divide between Sunni and Shi’ite Muslims and should cause scholars in the field to rethink the conventional concepts so often employed in this area. In this way, it represents a challenge to existing orthodoxies of knowledge in Islamic studies. Shi’ism in Southeast Asia will provide a basis and platform for future scholarly debate in the field. This is important because, as the recent Constitutional Court case concerning Shi’ite Muslims in Indonesia demonstrates, the need to understand the Shi’ite community, its origins, and its influence on Islamic thought in the region, remains of vital concern.