Religion in Times of Crisis

June 09, 2016
On 28 June 2016, the Asia Research Institute in Singapore will be hosting a seminar on "How to Study Religion in Times of Crisis". The event is organised by the Religion and Globalisation Cluster Fellows Giuseppe Bolotta, Catherine Scheer, Nurfadzilah Yahaya and Amelia Fauzia. The conference program is available here, or the abstract is below: 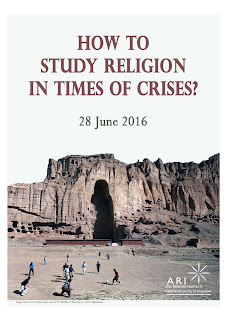 In times of crises, scholars of religion often feel compelled to address certain controversial issues as soon as they emerge. A growing number of scholars specialising in religious studies straddle the worlds of academia and the media. Under time constraints, they are sometimes forced to reduce context-specific and flexible religious traditions to generalizations in order to be accessible to the public. As a result, debates within the different fields under the broad rubric of religious studies that have a longer trajectory and pervasive role in the academy tend to be cast aside. Many scholars continue to feel a heightened sense of responsibility in presenting their research through careful crafting of narratives to avoid sensationalization or shallow analyses which are not helpful in the long run. This roundtable proposes to explore how scholars working on Asia could balance in-depth research amidst the quick unfolding of crucial current events that could not be analysed fast enough.

How can scholars stay relevant by being current whilst producing trenchant analyses?
How have scholars adjusted their investigations to methodologies that address events that require their attention immediately?
How has scholarship on religion been presented outside of academia?
How has the rise of social media impacted upon scholarship on religion?
How do scholars of religion incorporate these events into their research afterwards?
What frameworks should be adopted and avoided?

We hope that this conversation between scholars will help incubate new approaches to studying religion in Southeast Asia in particular, a region that has been neglected in despite its fair share of religious crises