May 27, 2016
I thought I would just provide an update of all the things going on at UNSW Law in relation to Myanmar. See flier here, or info below: 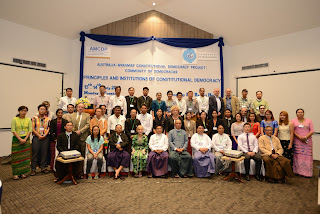 In 2013, the Australia-Myanmar Constitutional Democracy Project was established by Sydney University, in cooperation with UNSW, ANU and NUS. This was done at the request of Daw Aung San Suu Kyi, of the National League for Democracy, and her concerns to enhance constitutional literary and promote legal reform in Myanmar. The Project aims to directly increase the capacity of local actors to participate positively in the process of constitutional reform in Myanmar. It will do this by expanding the constitutional vocabulary of different groups within society (ethnic communities, grass-roots organisations, political leaders, members of the media) so that they can contribute to political discourse. It will also provide a forum for debate and discussion between groups and actors who may not previously have had opportunities to come together to participate in constitutional conversations. In the long term, the Project’s objective is to expand the democratic political space during a critical time in Myanmar’s transition towards constitutional democracy. The Project aims to support increased constitutional stability, leading to an environment where there is greater prospect for peaceful and equitable development. The Project also strengthens linkages and networks between scholars and members of civil society in Myanmar and Australia.

The first workshop was held in May 2013 in Yangon, and this was the first major international workshop on constitutional reform of its kind in Myanmar. It was attended by Daw Aung San Suu Kyi herself, as well as a wide range of civil society organisations, lawyers, judges, and politicians. Academics from UNSW included Professor Martin Krygier and Professor Adam Czarnota, and Dr Melissa Crouch. The workshop was sponsored by the Australian embassy, Rotary International, and Konrad Adenauer Foundation, and well as the partner universities concerned. The workshop was attended by See report on proceedings here, and media release here and here.

In 2014, UNSW Law School took over leadership of the Australia Myanmar Constitutional Democracy Project. Core project members include Professor Martin Krygier, Professor Theunis Roux, Dr Catherine Renshaw (UWS), Dr Melissa Crouch and Professor Wojciech Sadurski (Sydney). In November 2014, major workshops were again held in Yangon and Naypyidaw covering topics from constitutional amendment to federalism, separation of powers, bills of rights and the role of courts. The workshop was again sponsored by the Australian embassy, Rotary International, and the Konrad Adenauer Foundation, as well as the universities involved. See a report on proceedings here.

From 2015-2016, major funding was offered by the Community of Democracies and the Korea International Cooperation Agency (KOICA) to undertake further workshops to enhance democratic participation and constitutional literacy in Myanmar. In July 2015, two major workshops were held, one in Mandalay with a wide range of civil society actors, members of parliament and lawyers; the other in Naypyidaw with the Constitutional Tribunal members and court staff. A further workshop was also held on 23 November 2015 that explored the relationship between justice and constitutional democracy during periods of transition. This workshop was attended by over 90 people including Members of state and federal Parliaments, political party representatives, members of ethnic minorities, lawyers, members of the Myanmar National Human Rights Commission, academics, representatives of civil society organisations) and international experts from Asia, Australia and Myanmar.

Legal Education
In 2014, UNSW Law School signed a Memorandum of Understanding (MOU) with Mandalay Law Department, at the University of Mandalay. This was the initiative of Professor Carolyn Penfold and Professor Brendon Edgeworth, and was the result of their visit to Mandalay University in 2013. In February-March 2015, two law professors, Daw Htin Htay Ei and Daw Nu Nu Yee, from the Law Department at Mandalay University visited the UNSW Law School. In July 2015, Professor Brendon Edgeworth and Dr Melissa Crouch gave guest lectures at the Law Department in Mandalay to about 100 students and staff.

In March 2016, Professor David Dixon, Dean of UNSW Law, visited the University of Yangon, met with the Myanmar Centre for Responsible Business and the Australian Embassy. Further cooperation on legal education is planned in the future.

Myanmar/Burma Online Database at AsianLII
Professor Graham Greenleaf and Philip Chung have led the team at the Australasian Legal Information Institute (AustLII), in consultation with Dr Melissa Crouch, to set up a Myanmar/Burma online law database as part of the AsianLII program. On 23 May 2016, an official launch of the new database was hosted by UNSW Law. This is a significant resource and the database will continue to be expanded in the future. A guide on how to use the database is available online.

Further information on future events can be found at the Asia Pacific Law and Policy Forum page of the UNSW Law website.