Interview on religious freedom in Indonesia

December 03, 2015
Indonesia has struggled with religious violence in the democratic era. The problem was highlighted once again in October, with an attack on a Christian community in Aceh Singkil(link is external). Following the attack, Religious Affairs Minister Lukman Hakim Saifuddin acknowledged that there were problems with current regulations on the construction of houses of worship and said that there was a need to evaluate the policy. Dr Melissa Crouch has examined this policy, and others, in her book Law and Religion in Indonesia: Conflict and the Courts in West Java(link is external), published by Routledge in 2014. Indonesia at Melbourne spoke to Melissa about the state of religious freedom in the country. 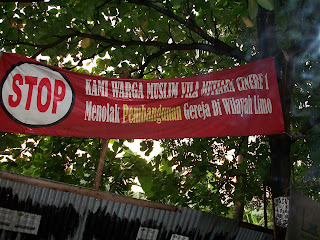 Last month, the Setara Institute released a list of the most tolerant – and intolerant(link is external) – cities in Indonesia. Many of the most intolerant cities were located in West Java, and the province consistently tops the nation for the highest numbers of violations of religious freedom. Is there anything in particular about West Java that makes it more intolerant?My book focuses on West Java because it has a large number of court cases concerning religious groups in the post-1998 era. The province has a high population of Muslims, a small minority of whom have advocated an Islamic state, at times through violent and illegal means. The question my book addresses is why religious groups are increasingly using the courts to address disputes between religious communities. I identify three key issues. First, since 1998 the transition to democracy has led to greater freedom of expression and association. In the absence of a strong state, radical Islamic groups have been able to exploit this freedom. Second, the push to decentralisation has increased the politicisation of religion at the local level. Third, the history of Muslim-Christian relations in Indonesia and the tensions over proselytisation continue to fuel suspicions between the two communities. A consideration of each of these factors is necessary to understand when and how intolerance arises in Indonesia, and, in particular, West Java.

The 2006 Joint Ministerial Regulation on the Construction of Houses of Worship is consistently identified as a factor in promoting religious conflict. Do you believe that the law should be reformed?There are some aspects of the regulation that are highly restrictive for minority religious communities and open to manipulation, such as the requirement to collect signatures from 90 members of that religious group and 60 local residents to obtain a permit for a building. The regulation also establishes Religious Harmony Forums (FKUB). These are committees of local religious leaders from the five main religious groups in Indonesia that play a role in deciding on applications to build places of worship. In areas with a large religious majority, the Forum is likely to consist primarily of leaders from that religious group. In majority-Muslim areas like West Java, this means it can be difficult for small Christian communities to obtain a permit for a church, as the local Forum will be dominated by Muslims. Likewise, in majority-Christian regions, such as Papua, Muslim communities may face similar difficulties to obtain a permit for a mosque.

But the focus should be primarily on addressing misuses of the law rather than reforming it. Often communities are able to fulfil the formal requirements of the law, but either the Forum wrongly feels it must make a decision in line with objections from radical groups, or the Forum issues a permit but radical groups prevent the religious community from being able to build. When faced with intimidation and violence from radical groups, and in the absence of a strong state, legal institutions become powerless to enforce the law.

Local politicians may also see it as politically expedient to support, or at least not challenge, the demands of radical Islamic groups in their efforts to prevent construction of religious buildings. Religion is misused for political gain.

A broader challenge is the role and influence of law in the post-Soeharto state. While significant constitutional and legal reforms have been introduced in Indonesia since 1998, in many areas, state law has little real influence.

When churches have gone to court in order to obtain a permit, their victory in court has sometimes been hollow because of ongoing violence and intimidation from radical Islamic groups. Churches have therefore approached the Ombudsman and the media to resolve the situation and have the church decision enforced. This suggests that courts in Indonesia don’t have the final say or authority in these kinds of disputes.

How else have religious groups used the courts to address religious disputes?In addition to church construction permits and the use of the Administrative Courts to try and resolve conflict, the courts have also been used to criminalise and condemn certain behaviour, making scapegoats of minority religious communities. The issue of blasphemy is a good example. Law No. 1/PNPS of 1965 makes it an offence to blaspheme a religion in Indonesia. This law was rarely used under former President Soeharto, but since 1998, there have been increasing instances of reports made to police against minority religious groups that are perceived to be blaspheming Islam. Accusations of blasphemy intersect with the politics and fear of religious conversion. In regions such as West Java often the people charged with blasphemy have left Islam, or belong to groups that are perceived to distort the teachings of Islam.

The Blasphemy Law has been challenged in the Indonesian Constitutional Court as being inconsistent with the right to religious freedom. The court, however, upheld the law as valid and in line with the policy of regulating religion in Indonesia.

Your research looked at “shari’a-inspired” regulations enacted at the local level that have discriminated against minorities. The Ministry of Home Affairs has historically been reluctant to repeal these regulations, even though the regulation of religion is the domain of the central government. Has the Ministry ever cancelled any of these regulations?I don’t know of any religious-based regulations that have been addressed or cancelled by the Ministry of Home Affairs. The national government has the power to regulate matters of religion but local government officials have enacted religious-based laws that, for example, enforce Islamic dress codes, enforce a curfew for women, regulate the fasting month, and other such practices.

A significant challenge is that no court has the authority to review local-level laws to consider whether they are in line with the Constitution. For example, Aceh has implemented a new Islamic Criminal Code(link is external) that extends shari’a law to non-Muslims. Because this law takes the form of a local-level regulation the Constitutional Court cannot review it – the Constitutional Court’s jurisdiction is limited to statutes passed by the House of Representatives (DPR). Likewise, although the Supreme Court can review local-level regulations it cannot review them for constitutional validity. In these circumstances, it comes back to Ministry of Home Affairs. Unfortunately, the Ministry has shown no interest in cancelling regulations on religion issued by local governments.

To what extent do you believe the positions of groups like the Indonesian Council of Ulama (MUI), Muhammadiyah and Nahdlatul Ulama affect intolerance and violence?Ahmadiyah, a minority group that calls itself a branch of Islam, is considered to be ‘deviant’ in Indonesia. Organisations such as MUI have issued fatwa against the teachings of the group. The fatwa of these organisations are not legally binding but they do have influence over state practices and, in particular, the Ministry of Religious Affairs. Fatwa may also be used in individual prosecutions for blasphemy as evidence that a person follows deviant teachings. Fatwa issued by MUI are more often ignored by individuals – such as the fatwa prohibiting smoking or the use of Facebook.

The Shi’a community has also been the subject of a condemnatory fatwa by MUI but NU and Muhammadiyah have been more public in their affirmation of the Shi’a as part of the broader Muslim community. The Ahmadiyah, meanwhile, are seen as quite different and their teachings more at odds with orthodox Islamic teachings.

More broadly, the difference between attitudes towards the Ahmadiyah and Shi’a followers points to the way in which religious tolerance in Indonesia has historically and contextually specific limits. It is important to recognise these cultural boundaries to make sense of the fault lines in public debates on religious inclusion and exclusion in contemporary Indonesia.

This interview first appeared on the Indonesia at Melbourne blog.