July 29, 2015
Myanmar is currently at a pivotal moment in its political and legal history. The Australia-Myanmar Constitutional Democracy Project (AMCDP), a consortium of law schools devoted to generating understanding and support for constitutional democracy in Myanmar, have just returned from a series of two workshops. 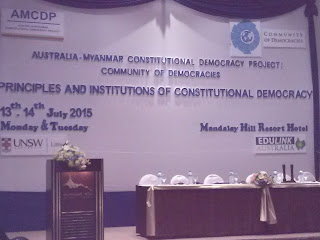 The workshops commenced in Mandalay for two days from 13-14 July, followed by a workshop on 16 July in the capital, Nay Pyi Daw. The AMCDP is currently led by two UNSW Law Professors, Martin Krygier and Theunis Roux. Other UNSW Law participants included Dr Melissa Crouch and Associate Professor Adam Czarnota. UNSW Law staff were joined in Myanmar by Dr Nick Cheesman of ANU and Janelle Saffin, former member of Australian State and Federal Parliaments and a leading specialist on the politics of Myanmar. 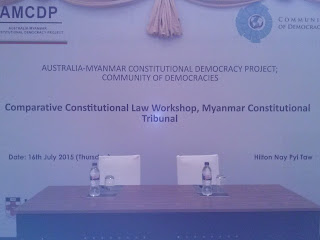 The most recent workshops were run in co-operation with the leading inter-governmental institution, the Community of Democracies, with funding provided by the foreign ministry of the Republic of Korea. Local participants in the first workshop included representatives of the regional government, the Union (national) Parliament, the Union Electoral Commission, a wide range of political parties, including ethnic representatives from several war-torn regions, five universities and higher education institutions, NGOs and CSOs, women's organisations, as well as lawyers’ organisations and sole practitioners.

The Nay Pyi Taw workshop was smaller and devoted to just one organisation, the Constitutional Tribunal. The purpose of this workshop was to explore the relevance of comparative constitutional law to the Tribunal. Theunis Roux led the discussion speaking on ideas of judicial empowerment – the process through which constitutional courts build their institutional legitimacy and become effective players in national politics. These ideas were then illustrated through discussion of the Indian and Indonesian experience. In the afternoon session, Dr Melissa Crouch talked about how constitutional courts elsewhere have used foreign law to inform and lend authority to their decisions.