April 30, 2015
Myanmar Burma Update 2015: Making Sense of Conflict
5 – 6 June 2015, Australian National University, Canberra
As rapid political, economic and social change in Myanmar continues, the next Myanmar (Burma) Update conference at the Australian National University will occur on Friday, 5 June and Saturday, 6 June 2015, ahead of the general elections anticipated for later in the year. Hosted by the Department of Political and Social Change, in the School of International, Political and Strategic Studies, ANU College of Asia and the Pacific, the conference has as its theme “Making Sense of Conflict”.
Since the last conference in 2013, Myanmar has succeeded in making progress on many key economic and social reforms, and in certain areas of institution building. At the same time, political, social and armed conflict persists, and in some parts of the country has increased considerably. The continuation of long-standing conflicts in Myanmar raises questions about their persistence and the prospects of efforts to resolve them. Other non-traditional conflicts also are emerging, and are cause for significant concern. 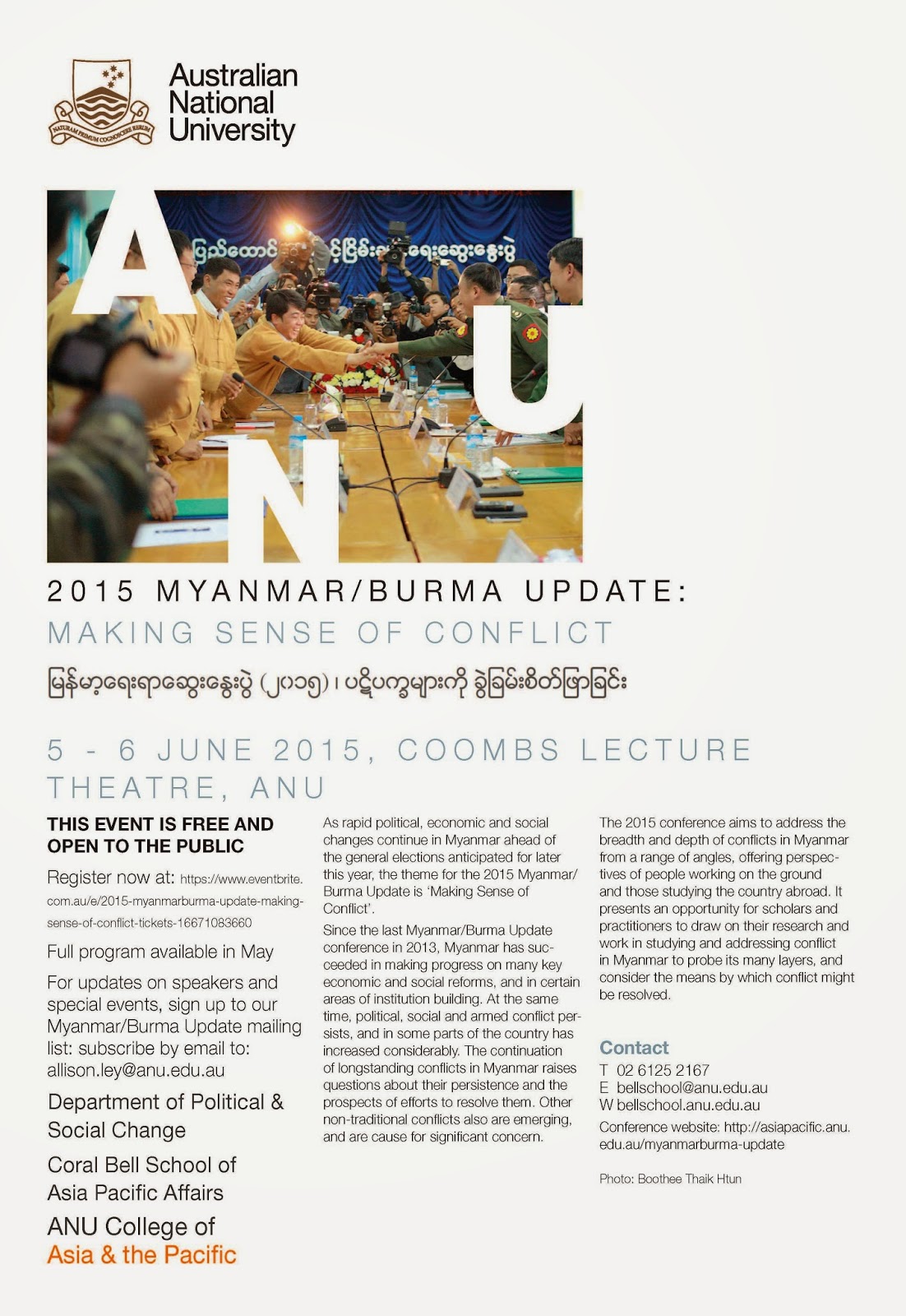 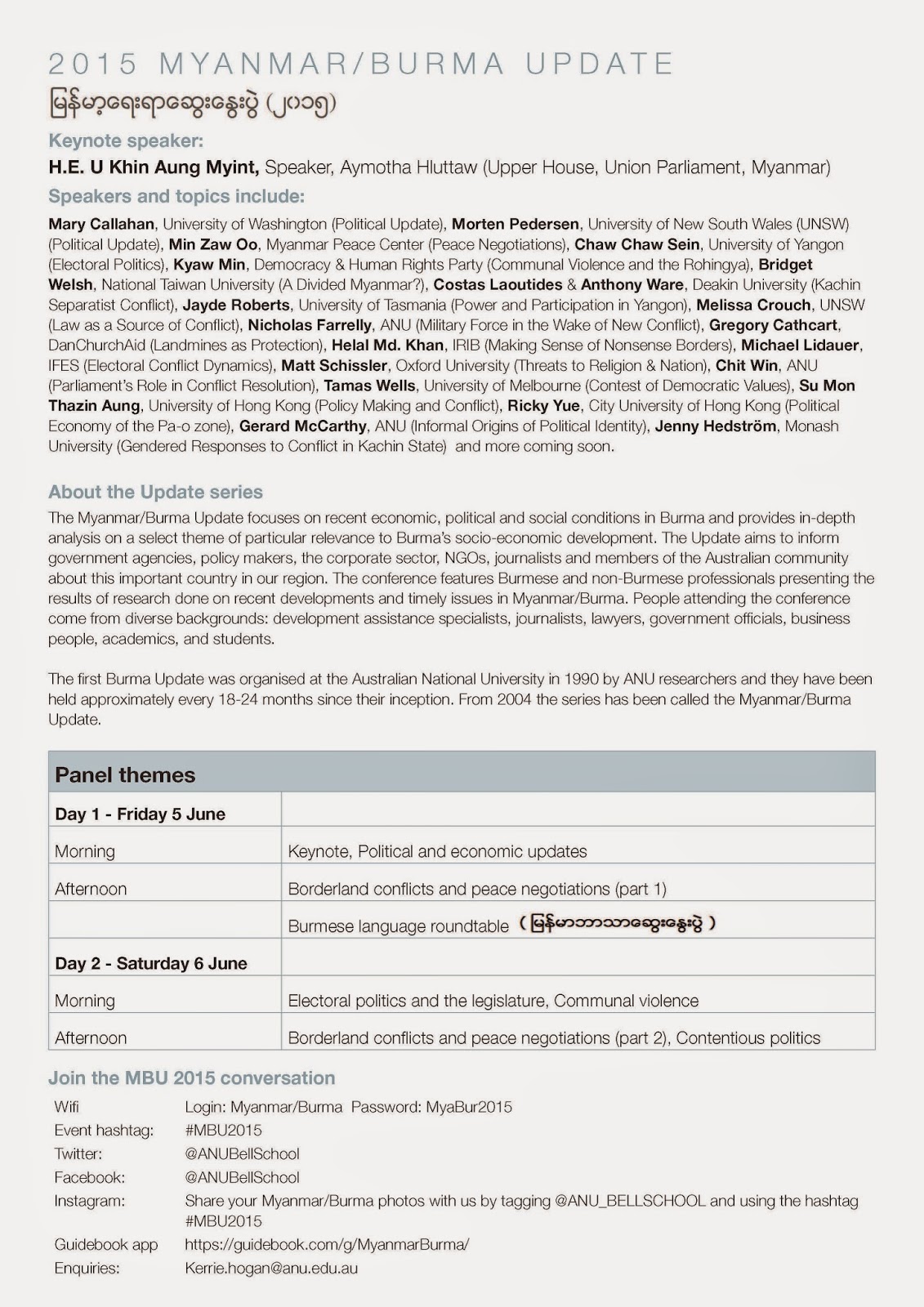 The conference aims to address the breadth and depth of conflicts in Myanmar from a range of angles, offering perspectives of people working on the ground and those studying the country abroad. It presents an opportunity for scholars and practitioners to draw on their research and work in studying and addressing conflict in Myanmar to probe its many layers, and consider the means by which conflict might be resolved. It also enables presenters to draw upon discussions had at the 2013 Update on “Debating Democratisation”, and builds on the outcomes of an event that the ANU held in Myanmar during March 2014, on the theme of communal conflict.
My own presentation will be on "Legislating Reform? Law and Conflict in Myanmar". The abstract of the talk is as follows: Legal and constitutional change often occurs at moments of political crisis. Since the political transition in 2011, efforts of the parliament and civil society have focused on a range of legal and constitutional reforms in Myanmar. This paper will reflect on the past five years of law reform in Myanmar in the broader context of legal reforms undertake since the end of socialist rule in 1988. While many have analysed the personalities and parties in politics, little attention has been paid to the policies and laws that have been passed. First, constitutional amendment has been a critical demand over the past few years, as concerns that the military retain its role in governance rub against demands for a more democratic future. In early 2015 a law was passed regulating referendums for constitutional amendment, although this comes without clear agreement on what proposals for reform should be put to a referendum. Second, there has been an increase in legislative reforms in parliament on a diverse range of areas. I identifies three themes in law-making: functional reforms to implement the new constitutional and political system, though most added little to the text of the Constitution itself; economic and business reforms largely geared towards actual or perceived efforts at greater foreign investment, including on banking, the establishment of special economic zones, and Company Law; and social reforms that affect civil society such as on labor, the media and freedom of assembly. This paper will analyse the extent to which these legislative changes have contributed to the broader process of political reform, and to political and social conflict. It concludes that these two areas– constitutional amendment and legislative reform - demonstrate a struggle between the imagined past and future visions, and highlight the way in which law remains a source and site of conflict in Myanmar.