May 14, 2013
On 21 May 2013, a policy paper, 'Trials of People Smugglers in Indonesia: 2007-2012', written by Dr Antje Missbach and Dr Melissa Crouch was launched by the new Centre for Indonesian Law, Islam and Society, at the University of Melbourne.

The policy paper addresses the critical need for greater knowledge and understanding of how the contemporary Indonesian legal system is dealing with people smuggling. It primarily presents the findings of a survey of court cases from May 2011 to December 2012, in the first year and a half of the operation of Law 6/2011 on Immigration. The paper identifies patterns in court cases in terms of the location of people smuggling operations, profiles of the accused, the criminal charges laid against them, and the severity of penalties handed down by the courts. The paper argues that any efforts to increase the scope and depth of such cooperation between Australia and Indonesia must take into account the progress made by, as well as the challenges confronting, law enforcement agencies in prosecuting people smugglers in Indonesian courts. 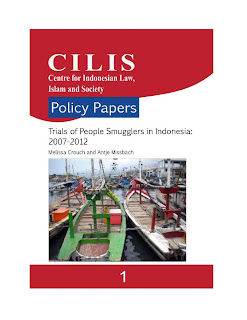